This is the sire to Lexi's first litter. FTW Goldengroves Gripper. His pictures just dont do him justice! He was a 6 hour journey to get to and well worth it. He is such a soft and loving dog and was EXACTLY what i was looking for in temperment. He is a nicely built strong dog with a fantastic top pedigree with many champs and winners in his line. He himself is a Field Trial Winner and not far off becoming a champ. His pedigree is a perfect match for Lexi's first litter.

Bobby is clear for PRA and BVA eye scheme. 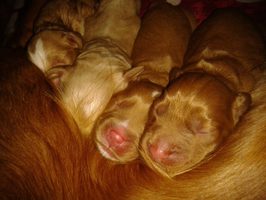 Lexi began whelping on the 26th September 2013. The first was presenting breach and appeared stuck so off to the vets produced a 12oz biiiig dark gold dog pup at 3pm. Another was born at the vets (4.20pm and 11oz) just to make sure she wasn't gonna keep having problems and then i got her back home. The second was also a dark gold dog pup, this one had a wee white flash on his head. Both dogs also have a white heart shape on their chests. Very cute!

At 5.45pm pup 3 was a very pale lemon bitch with a white underside. She again was a big pup at 12oz . Lexi had two further pups, both girls, however these last two didn't make it past 2 days old. Its always sad to lose pups, but not uncommon to lose some in the first 7 days.
The bitch is the double of dad FTW Goldengroves Gripper: strong with short legs and a beautiful white underside. The two dogs take after mum, being really dark red in colour. One of which in particular, is Lexi's double having all her white markings.

See our puppy pictures from Bobby and Lexi.

You can view his pedigree by clicking his picture.