Kinnadie Lexi of Rapidgold (AWG) born Feb 2011 from a litter of 8. Lexi was primarily trained as a gundog, to flush out game and work alongside the gun. She also competes in agility and was absolutely built for it.... She is so fast, and we absolutely love it!

2012
Lexi began her gundog career! Constant training and introduction to the gun, followed by a few opportunities later in the year at a couple of shooting weekends.

2013
Lexi did well in the shooting season. Responded nicely to runners, behaved well amongst the other dogs in the pick-up wagon, and proved herself to be valuable team member.

We began agility training and soon realised it was made for us!

Lexi had her first litter with Bobby-  FTW Goldengroves Gripper in sept. For more on these pups click here.

2014
In her first competitive year of agility, Lexi progressed from grade 1 to grade 4 and just missed out qualifying for Discover Dogs at SKC show in Aug.

We also won the Bronze Agility Award and

We also came 2nd in the Mad Spaniel league that was up against the whole of the UK !

2015
Lexi steadily progressed from grade 4  to grade 6 in her agility career (7 is the highest).

We are also only a couple of points away from winning the Gold Agility Award.

We also again came 2nd in the Mad Spaniel league that was up against the whole of the UK!

Im soooooo proud of her! 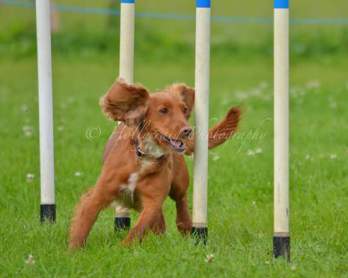 2016
Lexi compete in grade 6 and gained 6wins, however we still need one clear win to progress to g7,  which will now be next year.

We came 3rd in the Scottish grade 6 agility league.

We came 4th in the Gundog agility league.

Lexi got a new brother! She was a bit weary of him to begin with as he was very bouncy! On the third day of having him home lexi began to play with him and now loves her wee pal.

Lexi was mated to FTCH Rollafields Redbud at Naxshiven in December so we expect pups in the new year.

2017
Lexi had her second and final litter witch Boots- FTCH Rollafields Redbud at Naxshiven in March. For more details on this litter click Here.

Once back to herself after pups, lexis training can recommence. And with her new brother Zest competing in working tests, it's time to polish up lexis gundog work as I know she will sail through the tests IF I can get her back up to scratch.

2018
GOALS for this year is to get lovely clear consistent runs getting our final win to grade 7 and hopefully run in the CHAMPIONSHIPS in Aug at Dundee.