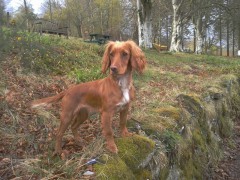 There are basically two ways to reinforce training. Positive and negative. I only use positive reinforcement. This works best for me, and for the pup. This also involves ignoring (to a point) 'bad' behaviour. I don't use the word 'no', i reserve it for something major eg. if she is about to run across the road "No!!" That way you reserve this term for when you really need her to stop in her tracks. Some spaniels also respond well to titbits, but I soon realised that Lexi was only interested in love as the reward. No problem there.

Obediance is the first step for a happy cocker spaniel. Recall, heelwork on and off lead, fetching items and stay.

From day one, she worked better off the lead than on it, and loved to show off her heelwork.

Of course there was the odd spaniels puppy strop where she'd recall nicely, sit in front of me, then dump the item at my feet. I'd simply walk away, which worked a treat. She would immediately pick up the item and come after me "are you not wanting it mum?"

This young gundog progressed very quickly and as she gained confidence in all these areas, I upped her training to suit her growing need to please. We moved onto the basic of basics gundog work by introducing her to hand signals. Simply by coming to a fork in the path of our routine walk and I'd signal with my arm and say "this way", adding shortly after a quick "pip" with the whistle. Before you had a chance to blink Lexi was trained to the whistle no problems.

Its in a spaniels nature to hunt in the bushy area of your chosen walking route. I didn't have to reinforce that at all. I did encourage her to continue to hunt along the line, instead of popping out every now and then and "miss" a bit. (Cruicial when hunting birds later). 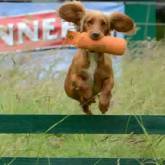 Next, I reinforced her retrieve with the "double pip" on the whistle (two shorts pips), and ensured she never strayed outwith her trained zone of 20yards. (may be more or less, I use my eye not a measuring tape!) I used a combination of canvas and half canvas/half rabbit fur training dummies, in various locations with numberous smells, distractions and other conditions.

Once she had passed all the above criteria, the next task was to make her steady to a flush.

This means: when shes in thick cover and raises up a bird, she has to freeze. The point of this is when you are out with the gun, you don't want your dog running in the direction you are about to fire!

This took a wee while, as it is any animals instinct to chase something thats going faster than them. After a few months of whistle training, and reinforcing (by running after her and putting her back where she was supposed to be), we also had a coupla shots in a rabbit pen (more of the above running), then became around 80% steady to flush.

The key: YOU have to be on the ball.

You had to see it, before she did...... and we all know how rapid a cocker spaniel is!

Then, and only when you are sure she is steady enough..... you can introduce her to the gun.

Introducing to water started early on, and to my surprise Lexi wasn't keen. With her pack, boisterously jumping in around her, she stood on the sidelines and just looked at me pitifully. After a wee encouragment, on her own she began to love swimming and grew in confidence when around her pack.

Fetching items in the water was next. Started with sticks, tennis balls, then a training dummy on a string (in case she lost it), then just the dummy.

The next step was to get lexi to not only fetch an item in the water, but also get an item that had landed on the opposite bank. This is a crucial element in the working gundog test and Lexi responded nicely. To ensure her first time was a succcess, I chose a spot where the access was good on the other side, then upped the difficulty gradually. From flat to a small jump/climb/scrabble up the opposite side.

With directions from me, hunting along the otherside of the bank became routine in our walks that Lexi loved. Now, everytime we're out, Lexi waits for me at our frequent spots along the waters edge.

Our first show was in Dundee in 2013. Although it was only our first show, in our first run Lexi performed like a pro. Clearing all the obstacles, and on the last jump I was so excited I accidentaly signalled, and she went under (oops) the jump, which eliminated us. I was so chuffed with her performance and even the crowd cheered us as we finished. Brilliant! We didn't win any rossettes, and that wasn't a problem, as we learned heaps and had great fun learning the ropes of how a KC show works.

Lexi and I now have amazing teamwork in agility. With each season, we compete in more and more shows in Scotland, and continue to come away with many rossettes. Lexi has her fan club at shows and photographers love her flying golden lugs. We won two agility awards from the vast amount of points we gained in a season. Lexi also won two agility leagues and came 2nd in another which was against all spaniels in the UK!!

Lexi truly is a star in the making. Of course, I am biased!