Tarrantvale Mint at Rapidgold born July 2016 from a litter of 5. Sire Jackalantern Hedwig, dam Spiderwick Freckle Face. First boy to join our team and I am excited to start puppy training!

Zest was thoroughly researched and brought up from deep in England to join Rapidgold Cocker Spaniels in agility. The Jackalantern line has been improving its spaniels for 30 years in both health and working ability. When I saw their vinny (Jackalantern Hedwig), his outstanding conformation and strong ability I knew I had to get a pup from him. I waited a while for the right bitch to be put to him and was very pleased with the pairing with Spiderwick Freckle Face.

His pedigree is full of exceptional healthy strong working line dogs that all actively work the shooting season. Zest brings some nice fresh lines into Scotland which will significantly lower the coi of any bitch up here.

Zest is hereditary clear for PRCD/PRA, AMS & FN, patella 0/0, and also has a clear and current BVA eye test and GONIO cert.

2017
Zest competed in a couple of working tests earlier in the year. This was a great opportunity for us to see what criteria is needed for the tests and also to compare my training and zests ability with the others also in the test.

Zest is becoming more steady and reliable than Lexi was at this age. He is maturing nicely and progressing well through his gundog training.

He is now steady to thrown dummies and drops to shot without reinforcement. He is a strong and fast lad that has retrieved all sorts of cold and warm game no bother.

Looking forward to getting him out this shooting season to continue his training. I know he will go up a gear!

I always focus on gundog training first with my guys. The advanced obediance is a great base for future agility work also.

Zest also has a good understanding of agility basics, he completes training with ease and has experienced running in the ring at training events. 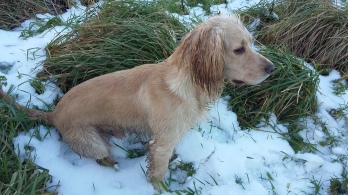 Zest took to his first shooting season like he'd been doing it for years. Was great seeing his training coming through.

In fact he became so reliable at his job that I was able to work two dogs, knowing thst he was doing his job.

Zest picked pheasants, partridge, woodcock and pigeons during the season and was out every weekend.

He was a natural at his job, flushing birds and recalling beautifully. Every day he was out he seemed to learn more of his job and by the end of the season he was on his peak: crashing through the gorse and blasting through the trees- out of sight but never too far.

Now the season is over its back to dummy work for the test season -unfortunately zest has become bored of dummies. So I will give him a break and focus on agility work over the summer.

Zest is excelling in his agility training. Learning how to perform on each obstacle and doing well. He has run in a couple of competitions to see how he fairs in the different atmosphere. He wasn't phased in the slightest and with each run he continued to better himself.

His next run will be in August which gives me.plenty time to nail his weaves.