Rapidgold Lytle Pix born March 5th 2017 from a litter of 2. Sire FTCH Rollafields Redbud at Naxshivan, dam our own Kinnadie Lexi of Rapidgold (AWG). This little pup has big boots to fill and I've no doubt she will be a future agility star!

Who to keep from this litter by boots x lexi was a hard choice. I chopped and changed a few times.

But I found it hard to ignore this little one as she has all the markings of her granny Jessie (Fordyce Primrose of Kinnadie).

Jessie was the whole reason I wanted Lexi, and considering there aren't many descendants with all jessie's markings I had to chose this little one

At around 3.5weeks old, one pup began to became noisy and dominant which made my choice easy as noise certainly isn't something I wanted for a gundog!

She already has the basic sit and stay and manners when I'm holding something she wants.

This one is gonna be very easy to train as she instinctualy has a lovely soft mouth and gives up anything for me & also naturally walks to heel when on lead which is always a bonus as it's one less thing to train!

Basics will begin with steadiness around thrown items. She already delivers to hand so i don't have to overly promote that with her. I will mainly work with fur and feather at this stage and introduce her to gunshot.

Pixel is a water baby and dives into the river with huge enthusiasm for any thrown item. Tick that off my list too!

Pixel has done some groundwork in agility: she had her 2o2o position nailed from quite a young age, but I'm gonna concentrate on gundog obediance as is my priority with the youngsters.

Pixel is the first home bred bitch from my line.

A lot of research went into finding the correct stud, plus optimal timing to interrupt Lexi's agility career, and so with her outstanding pedigree, I'd like to enter Pixel in a few FT tests in the new year to see what she's got!

There are a couple of things to work on with her but I'm quite happy to continue to enter her into working tests.

I knew this would be great but didn't expect to be placed in her first test! So proud of her. 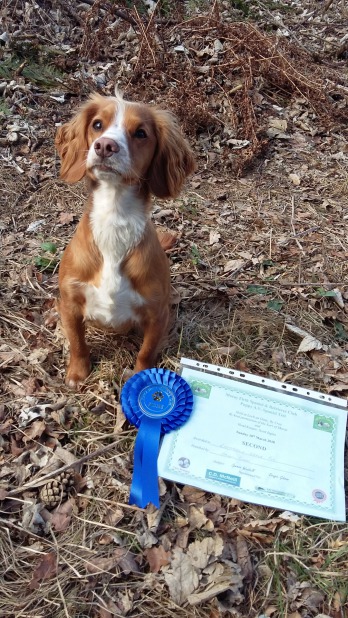 Pixel ran in another working test this year.... she came 3rd! Her hunting pattern was spectacular! It was even complimented on which was a major boost.

There is so much potential in this little one that I have put agility on hold. Pixel will continue training with aims to trial later in the year.

Pixel had a very.successful first shooting season last year. She has an incredible nose and is very resilient- if she can't find a bird she just goes further til she does.

I had the pleasure of not only beating with her and having her on the peg with me but also being able to do some rough shooting with her. Nothing more rewarding than shooting over your own dogs!

Pixel was especially brilliant at using her nose on runners- often birds lost by other dogs- pixel again showing great resilience. What a pleasure she was!

She has also done some hide shooting with me this year on the pigeons. First time in the hide and wow what and pro. She never left the hide until told to do so and she never ran out with every shot like you see most dogs doing these days, she also didn't need tethered while in the hide.

SUPER proud of he she is developing.